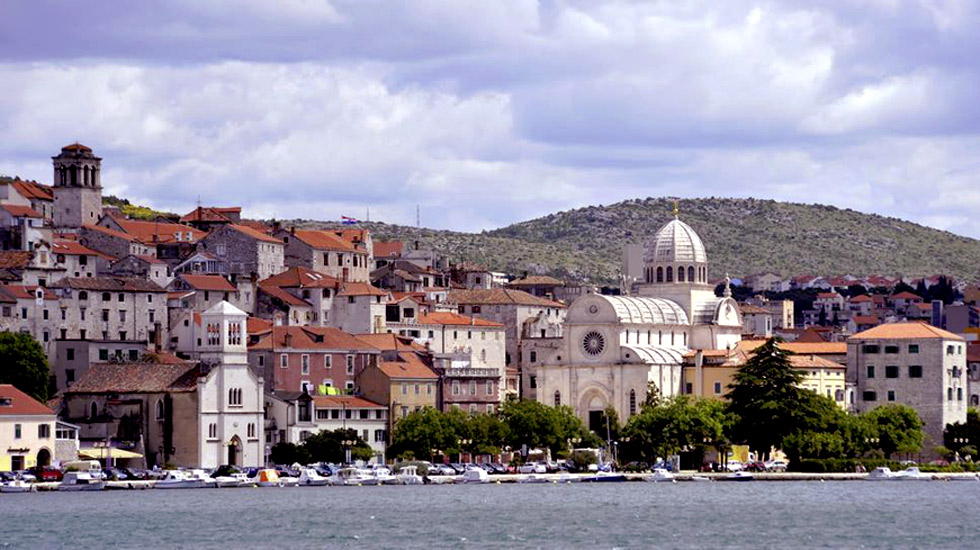 Unlike other cities along the Adriatic coast, which were established by Greeks, Illyrians and Romans, Šibenik was founded by Croats.
Some of the areas just to the north of us here in Trogir, were originally settled by Croats.

Like other cities in Dalmatia, it was under the rule of Venice, Hungary, and the Byzantine Empires. It went through the same struggles in the middle ages as other Dalmatian cities, but overlords changed hands more frequently.
The most famous building in Sibenik, the Cathedral of St. James, was built during the same general time period as St. Lawrence cathedral in Trogir.

It is also under the protection of UNESCO as a world heritage site. Made entirely out of stone, it is known primarily for its stunning architecture. Also for being a location for an episode in season 5 of Game of Thrones.

The fall of the Republic of Venice in 1797 brought Sebenico under the authority of the Habsburg Monarchy., along with most of the rest of Dalmatia.

Part from Sibenik tourist board :

Šibenik is in the central part of the Croatian Adriatic Coast, in the picturesque and indented bay where the Krka River, one of the most beautiful karst rivers in Croatia enters the sea.

Šibenik today is the administrative, political, economic, social and cultural centre of the County of Šibenik and Knin which extends along the 100 kilometre long coastline between the Zadar and Split Rivieras, extending up to 45 kilometres into the hinterland area, at the bottom of Dinara mountain.
The open sea and islands are reached from the 300-1200 metre-wide and 10 km long Šibenik Bay, through the narrow, winding channel.

Although the coastal belt of the Šibenik area only reaches a few kilometers inland, to the Trtar mountain chain and Mt. Svilaja in the south-eastern part, 66 % of all its population live here. After World War II it underwent very rapid urbanization.   read more>>

Salona Ancient city and the…